According to SFPD data, which San Francisco street corners sell the most drugs?

The busiest block in San Francisco for drugs is arguably Hyde Street between Turk and Golden Gate.

Roughly speaking, this block is also the geographic center of the drug trade. With the exception of the 6th Street & 9th Street areas of SOMA (which are hubs for meth and crack, respectively), the drug trade is generally concentrated around Civic Center. 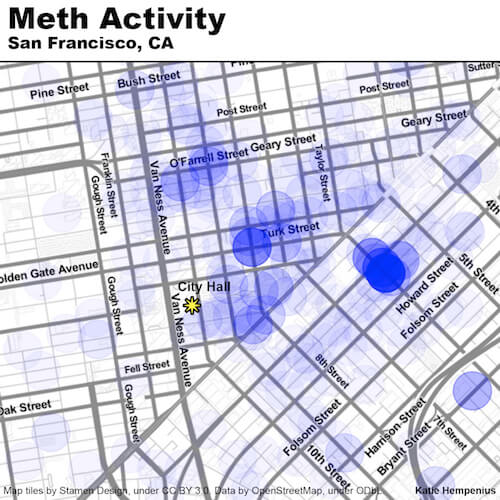 The one-block segment of 6th Street between Jessie and Natoma Streets is the heart of the city’s meth trade. Within that block, the busiest spot for meth activity seems to be at the intersection of 6th Street and Minna.

There were 755 meth-related incidents within the past year, which almost equals that of crack (440 incidents) and heroin (402 incidents) combined. 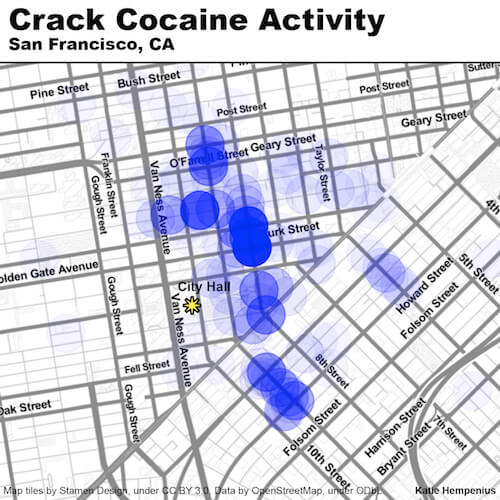 The seven-block stretch of Hyde Street between Market and O’Farrell is a busy corridor for crack, with the block between Turk and Golden Gate being the city’s busiest.

Within SOMA, crack activity is concentrated along 9th Street between Mission and Howard (9th & Mission is the busiest spot on that block). There is also marginal crack activity along the 6th Street corridor between Market and Howard.

Like crack, the busiest street for heroin is Hyde Street between Turk and Golden Gate.

However, when compared to crack, heroin seems to have a slightly more southern distribution within Civic Center. The crack trade is prominent as far north as Geary Street, while the heroin trade starts to taper off after Turk Street.

Where did this data come from?

This data comes from SFPD incidents for September 2016 through August 2017. Note: Drug activity that has attracted the interest of law enforcement is not a perfect proxy for all drug activity, and these results should be interepretted with that in mind.

The charts and analysis were created using R.

What about other parts of the city?

Drug activity is so concentrated in the area immediately surrounding Civic Center that I chose not to include other parts of the city in these charts. The one minor exception to this is the 16th Street & Mission BART station. This location has a non-negligible level of drug activity (primarily invovling meth or crack) - however, it is fairly low compared to the level of activity around Civic Center.

Why did I make this?

Given how visible the drug industry is within San Francisco, I've always been curious about how it operates - in particular how it varies from block to block. This curiosity spurred me to start exploring the SFPD data for drug incidents.